Don't be dependent on your smartphone

According to a study, cellphone obsession may trigger depression and loneliness
Agencies 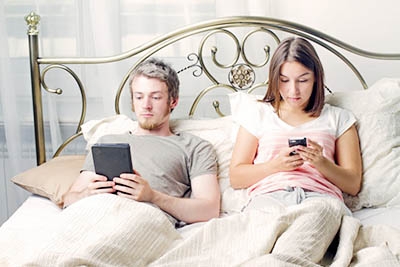 However, it's been unclear whether reliance on smartphones precedes those symptoms, or whether the reverse is true -- that depressed or lonely people are more likely to become dependent on their phones.

In a study of 346 participants, ages 18-20, researcher Matthew Lapierre and his collaborators from University of Arizona found that smartphone dependency predicts higher reports of depressive symptoms and loneliness, rather than the other way around. "The main takeaway is that smartphone dependency directly predicts later depressive symptoms," said Lapierre, assistant professor in the department of communication.

"There's an issue where people are entirely too reliant on the device, in terms of feeling anxious if they don't have it accessible, and they're using it to the detriment of their day-to-day life." In the study, which will be published in the Journal of Adolescent Health, Lapierre and his co-authors focus on smartphone dependency rather than on general smartphone use, which can actually provide benefits.