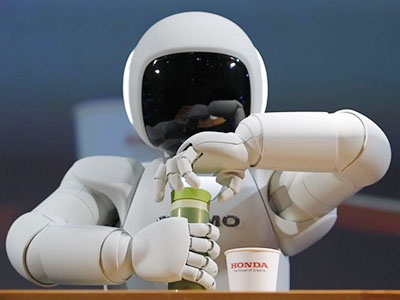 Honda Motor Co's Asimo humanoid robot opens the top of a bottle to pour the drink into a cup during a news conference at the 42nd Tokyo Motor Show in Tokyo November 30, 2011. REUTERS/Toru Hanai (JAPAN - Tags: BUSINESS SCIENCE TECHNOLOGY) |

Beijing : A Chinese firm specialising in precision technology has set up the first unmanned factory at Dongguan city where all the processes are operated by robots, regarded as futuristic solution to tide over China’s looming demographic crisis and dependence on manual workers, reports PTI.

In the plant, all the processes are operated by computer- controlled robots, computer numerical control machining equipment, unmanned transport trucks and automated warehouse equipment. The technical staff just sits at the computer and monitors through a central control system.

Each line has an automatic belt with just three workers who are just responsible for checking lines and monitoring. A few months ago, it required 650 workers to finish this process. A robot arm can replace six to eight workers, now there are 60 workers and the number will be reduced to 20 in the future, Luo Weiqiang, general manager of the company told the Daily.

This is the first step of the “robot replace human” programme, it said. In the next two years, the number of robots will be increased to 1,000 and 80 per cent process will be conducted by robots, said Chen Qixing, president of the company.

Compared with many skilled workers, these robots are new hands.

But they made far more and better products than well- trained workers and experts, the report said. With nearly 200 million people above

60 years and old age population set to rise sharply, China is bracing to face demographic crisis in the near future as it will have fewer work force.