Who killed doesn’t matter, all are fighting against terrorism: Rijiju 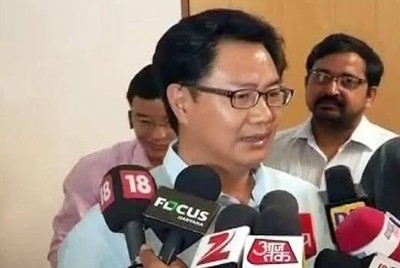 New Delhi: Amid the ongoing claims and counter claims by the CRPF and BSF over who killed one of the terrorists in the Udhampur attack, Minister of State for Home Kiren Rijiju on Thursday emphasized that such questions should not be raised as the nation is committed to fight against terrorism.

“It’s not a question if the CRPF or the BSF killed the terrorist. At the end it’s about the nation. Such questions must not be raised,” Rijiju told the media here.

“There is no question of comparing it. It is a fight of the entire nation and the nation is fighting against the terrorism,” he added.

BSF Director General D.K. Pathak, however, earlier in the day clearly stated that it was one of his men Rocky who killed the terrorist.

On Wednesday morning, Usman Khan and Nomen Khan ambushed a BSF convoy in Udhampur, killing two soldiers and injuring eight others. In the ensuing gun battle, Nomen was killed while Usman fled into the dense forests after taking three people hostage.

Usman was later surrounded by a team of BSF and Army soldiers and a brief gun battle followed after which he was captured and taken for interrogation.