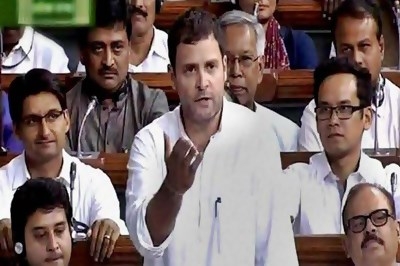 New Delhi: The voice of the opposition is “being suppressed in parliament”, said Congress vice president Rahul Gandhi as the party continued its protest for the third day on Thursday over the suspension of 25 of its MPs by Lok Sabha Speaker Sumitra Mahajan.

The protestors wore black bands on their arms.  “Voice of the opposition is being suppressed in parliament,” Congress vice president Rahul Gandhi told reporters.

The Congress members continued to attack Prime Minister Narendra Modi for his inaction against the External Affairs Minister Sushma Swaraj and BJP Chief Ministers Vasundhara Raje and Shivraj Singh Chouhan for their involvement in the Lalit Modi controversy and Vyapam recruitment scam.

Shouting anti-government slogans, the members maintained that they will continue to protest against the suspension of their colleagues till top BJP leaders involved in the controversy resign.

The Janata Dal-United and Rashtriya Janata Dal leaders also participated in the protest. JD-U President Sharad Yadav urged the Lok Sabha speaker to revoke the suspension of the Congress MPs.

“The speaker’s decision has created a tension between the government and the opposition,” he told reporters. On Monday, Mahajan suspended the Congress MPs for five days for “wilfully obstructing the business of the house” and not adhering to her repeated requests to observe the rules in the house.