Video! Children use abusive slogans against PM Modi; this is how Priyanka Gandhi reacted 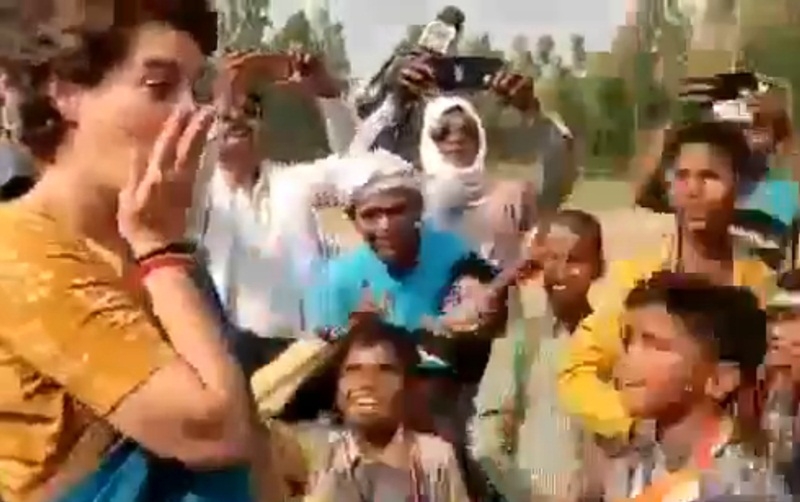 Meanwhile, two version of videos are going viral, in one in which she stops the kids from using abusive slogans while the other video shows her happy and unable to hold back her smile.

When kids in their excitement make distasteful remarks against PM Narendra Modi.@priyankagandhi ji discourages them against raising such slogans and says “Ache Bachhe Bano”! pic.twitter.com/yNghJwJm91

Sharing the edited or incomplete version of Priyanka Gandhi’s video, angry Union Minister Smriti Irani attacked Gandhi family on Tuesday night. “Uncouth to the core,” the Irani fumed. “Imagine the filthiest of abuses that a prime minister has to endure from people whose only claim to fame is a nose.”

Uncouth to the core. Imagine the filthiest of abuses that a Prime Minister has to endure from people whose only claim to fame is a nose. Lutyens outrage anyone ???? https://t.co/T5sPyKtmbr

Coming back to kids, they immediately change their slogan after Priyanka Gandhi stopped them. The kids then started chanting Rahul Gandhi Zindabad slogans.

Priyanka Gandhi Vadra is Congress’s general secretary in charge of eastern Uttar Pradesh. Her brother and Congress party president Rahul Gandhi is in a race with Union Minister Smriti Irani for the Amethi seat.