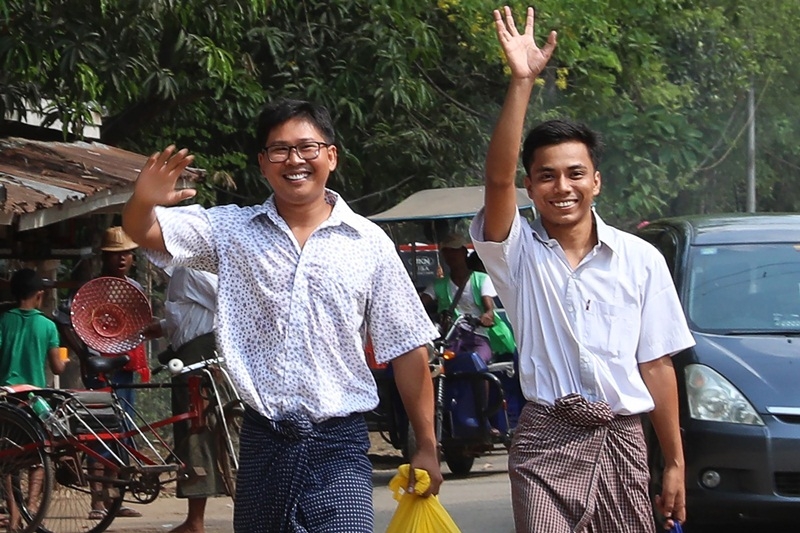 Reuters journalists Wa Lone (L) and Kyaw Soe Oo wave outside Insein prison after being freed in a presidential amnesty in Yangon. (Photo by STR / AFP) |

Yangon: Two Reuters journalists, who were jailed after reporting a massacre carried out by Myanmar’s military forces against the Rohingya Muslim minority, were freed on Tuesday after more than 500 days in prison.

Wa Lone, 33, and Kyaw Soe Oo, 29, were found guilty in September 2018 of violating the colonial-era Official Secrets Act over their reporting of the massacre in the village of Inn Dinn in Rakhine state. They were sentenced to seven years in prison. Locked up since 2017, the journalists, who received this year’s Pulitzer Prize for International Reporting, were freed on Tuesday morning after they received a presidential pardon earlier this week, CNN reported.

As he left the prison, Wa Lone thanked supporters for calling for his and his colleague’s release. “Inside in the prison and also around the world people were wishing to release us so I’d like to say thank you very much for everything,” he said, adding he was “really happy — excited — to see my family and colleagues. And I can’t wait to go to my newsroom”.

In January, the High Court in Yangon threw out their appeals, and on April 23, the country’s Supreme Court rejected their last attempt to get their convictions overturned. After that final defeat, the journalists’ lawyer said they had to hope for a presidential pardon, which they finally received this week after years of international pressure. Wa Lone and Kyaw Soe Oo, their lawyers, and the news agency have all maintained that the pair never committed any crime.

The reporters said they were entrapped, a claim backed by the testimony of police captain Moe Yan Naing, who testified last month that a senior officer had ordered him and other subordinates to offer secret documents to Wa Lone as bait, reports Efe news. The Inn Dinn massacre being investigated by the journalists came during a brutal campaign by the military against the Muslim Rohingya minority in August 2017 after a series of attacks by an insurgent group of the same ethnicity against around 30 security posts. The investigation led to seven soldiers being sentenced to 10 years in prison, the only case of abuse acknowledged by Myanmar authorities. More than 720,000 Rohingya are estimated to have been forced to flee into Bangladesh as a result of the ensuing violence.