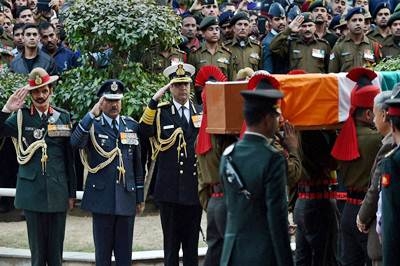 Dharwad (KTK): The body of Lance Naik Hanumanthappa Koppad was laid to rest with full state honours, after thousands of people bid an emotional farewell to the Siachen braveheart at his native village of Betadur in Dharwad district of north Karnataka today. Full throated chants of “Hanumanthappa amar rahe” and patriotic slogans rent the air as the mortal remains of Hanumanthappa was buried at a land adjacent to the Gram Panchayat office, with thousands of people from the village and nearby areas cutting across age, in attendance.

The last rites were performed according to Lingayat community rituals. The scene of Hanumanthappa’s wife, mother and two-year-old daughter paying their last respects at the High School ground in Betadur touched the chord of hundreds of people, who had gathered there, leaving many teary-eyed.

An air of melancholy hung in the air as the family of Hanumanthappa was inconsolable, and at one point of time, his wife Mahadevi even fainted and was consoled by members of the family, the military and police.

The village was in sorrow ever since yesterday as hope and prayers gave way to gloom with the death of Hanumanthappa, a resident of Betadur who had joined the army 13 years ago, chasing his dream even after being rejected earlier at some army recruitment rallies.

Earlier, Hanumanthappa’s body that was kept at KIMS Hospital in Hubballi last night was shifted to Nehru Ground in the city, where hundreds of people arrived in an unending stream and paid their homage.

Siddaramaiah visited Betadur to meet Hanumanthappa’s family members and consoled them. The body of 33-year-old Hanumanthappa,who epitomised grit and determination having survived miraculously under 30 feet of ice and snow under which he was buried for six days, was brought to Hubballi last night from Delhi where he breathed his last after a valiant battle for life.

The Chief Minister had yesterday announced an ex-gratia of Rs 25 lakh for the bereaved family. He had also announced a site, land, job for Hanamanthappa’s wife and memorial for the brave heart.

Karnataka government has said that similar compensation will be given to two other soldiers from the state- Mahesh from Mysuru, Nagesh from Hassan who have died in the Siachen tragedy.