There are 1-2 terrorists in Parliament: Sadhvi Prachi 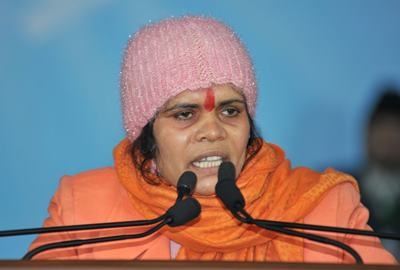 Roorkee: Firebrand VHP leader Sadhvi Prachi triggered another controversy today by alleging there re “one or two terrorists” in Parliament in remarks that appeared to be targeting MPs who were against hanging of 1993 Mumbai blasts convict Yakub Memon. Prachi’s controversial outburst that sparked an outrage also saw her asking the Centre to hand over the Pakistani terrorist Mohammed Naved Yakub arrested in Udhampur yesterday to Hindu organizations so that he is taught a “good lesson”.

The saffron leader was speaking to mediapersons in Roorkee when asked about some opposition to death penalty for Memon who was hanged on July 30 in a Nagpur prison. “It is a big misfortune that in the Indian Parliament, we have one-two terrorists sitting there. I do not think there can be a bigger misfortune for India than this as they who, are disobeying the judgement of a court, because the court has proved that he(Yakub) is a terrorist.

When the court has already proved so, those supporting the terrorist are terrorists themselves I believe,” she said. Shortly after Yakub’s execution, Congress MP Shashi Tharoor said he was saddened by the hanging of the lone death row convict in the 1993 Mumbai blasts case and said that the “state-sponsored killing diminishes us all by reducing us to murderers too.” Tharoor also argued against the death penalty.

“Yakub Memon hanged. Exemplary urgency and commitment has been shown by Govt and Judiciary in punishing an accused of Terror,” said another Congress leader Digvijay Singh, a Rajya Sabha MP.

Congress took on the Sadhvi for her remarks against parliamentarians and demanded action against the Hindutva leader.

“The Parliament belongs to all of us. The Constitution has said that Parliament is the temple of democracy. And if someone calls those sitting inside it, as terrorists, then it is not just an insult to the Parliament but also the Constitution. I think it is the right time that Speaker Sumitra Mahajan takes action,” Congress leader Pramod Tiwari said.

The Sadhvi also wanted the Pakistani terrorist captured yesterday to be handed over to Hindu organisations after questioning.

“It is my humble request to the Centre that after the security agencies are through with their necessary investigations the arrested Pakistani terrorist should be handed over to Hindu outfits which alone can teach him a good lesson,” she added.

Be it calling for a boycott of films starring Bollywood stars Shah Rukh Khan, Aamir Khan and Salman Khan and asking right wing Hindu outfits to make a bonfire of posters of their films or calling Mahatma Gandhi a British agent the Sadhvi has been at the centre of a series of controversies.