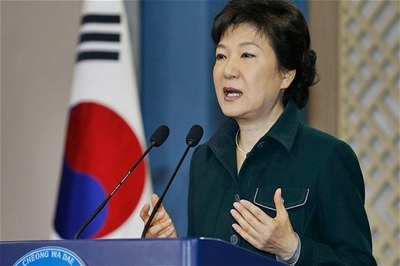 Park shut the park in response to the North’s recent long-range rocket test, which Seoul and Washington see as a test of banned ballistic missile technology. North Korea last month also conducted a nuclear test. Both developments put the country further along it its quest for a nuclear armed missile that could reach the US mainland.

Without elaborating, Park said the North has diverted Seoul payments to North Korean workers at the factory park to the Pyongyang leadership, which is in charge of nuclear and missile development. She also said the South has sent more than USD 3 billion in government and civilian aid to the North since mid-1990s.

Park called for support for her government amid a divide in South Korea about its tough response to North Korea. “Aiming the point of a sword back to us and splitting us up are something that must not take place,” she said.

Some analysts have said that without Kaesong as leverage, South Korea’s ability to influence change in the North has now evaporated. It is unusual for a top South Korean official to publicly touch upon such a government collapse in North Korea because of worries about how sensitive North Korea is to talk of its
authoritarian government losing power. Pyongyang has long accused Washington and Seoul of agitating for its collapse.