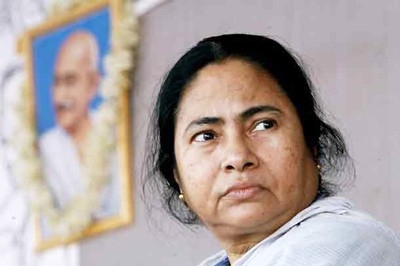 “I have cross-checked thrice, there was no assault... there was some heated debate.” -- Mamata Banerjee West Bengal CM |

New Delhi: Amid Congress protests in Parliament, Sonia Gandhi is understood to have come in for praise from West Bengal Chief Minister Mamata Banerjee during their informal interaction in Parliament House today. Sources said while Banerjee greeted Gandhi in the Central Hall and is learnt to have told her that she was giving a good fight to the BJP-led government, the Congress chief is understood to have said she had learnt this from the Trinamool supremo.

The Banerjee-Gandhi meeting came a day ahead of the West Bengal chief minister’s talks with Prime Minister Narendra Modi. Banerjee is here to meet Modi primarily to seek central assistance for the flood-hit state. Banerjee was earlier part of the Congress and was known as a ‘street-fighter’ who had virtually single-handedly ousted the Left Front from power after a 34-year rule.

Congress and TMC have been working in tandem in Parliament on several issues and TMC today supported Congress demand for discussion under adjournment motion on External Affairs Minister Sushma Swaraj’s role in the Lalit Modi controversy.

Later when she went to the Central Hall along with her party MPs, several members of other parties also met and spoke to her. BJP MPs also exchanged pleasantries with her.