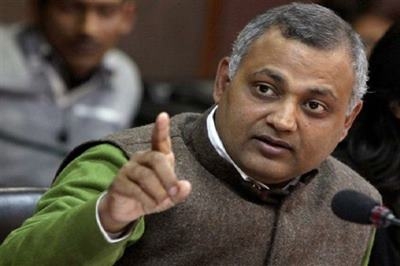 New Delhi: The fugitive AAP lawmaker Somnath Bharti will surrender by Monday evening as the Supreme Court said it would hear his plea for anticipatory bail only after he surrenders and joins investigation into his wife’s allegations of domestic violence. The apex court bench of Chief Justice H.L. Dattu and Justice Amitabha Roy said this while recording a statement by senior counsel Gopal Subramaniam that Bharti will surrender before the police by 6-6.30 p.m. on Monday. As the court recorded Subramaniam’s statement, the court said it will hear the matter further on Thursday, indicating that it may refer the matter to the Supreme Court mediation centre to resolve the dispute between Bharti and his wife. At the outset of the hearing, the court questioned the conduct of Bharti as a responsible citizen in evading police even after his plea for anticipatory bail was declined both by the lower court and the Delhi High Court.