Rawat should be booked under Prevention of Corruption Act: BJP 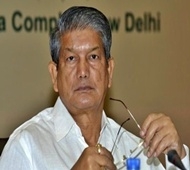 Dehradun: Uttarakhand BJP today demanded that unseated chief minister Harish Rawat be booked under the Prevention of Corruption Act over a recent sting CD which it claimed was “the first blatant case of corruption of its kind” in the country. “A case must immediately be lodged against Rawat under the Prevention of Corruption Act on the basis of the sting CD in which he is clearly seen offering a bribe and inviting people

He further alleged it is “the first blatant case of corruption of its kind in the country where the chief minister himself is negotiating a money deal to win back the support of
rebel MLAs with a private individual who occupies no official position”.

Claiming that the ‘sting’ CD indicates Rawat was striking a shady deal in “full knowledge” of the Congress high command, the state BJP spokesman said all those involved in the “criminal conspiracy”, too, should be booked under the Act.

On Rawat raising doubts about the credentials of the man who had conducted the ‘sting’ operation, Chauhan said the argument is “flimsy” and only adds to the gravity of the crime. “The chief minister goes in an official chopper to Jolly Grant airport to meet a private individual and strikes a deal to win back his MLAs by offering them Rs 5 crore each.

“But when he is caught on camera doing all this, he begins to doubt the credentials of the man behind the operation. That is further proof of his involvement,” he said.

On March 26, the rebel Congress MLAs had alleged that they were offered a bribe by Rawat who was seeking their support for the floor test in the Assembly which was slated for today. They had also released the sting CD, which Rawat has dismissed
as “fake”.