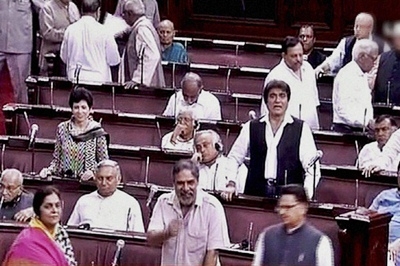 New Delhi: The Rajya Sabha faced disruptions again on Wednesday, with the logjam over Lalit Modi and the Vyapam case continuing on the second last day of the monsoon session.

As the house met, Deputy Chairman P.J. Kurien said he was disallowing the notice on the issue because despite allowing it on several previous occasions, the debate was never taken up. Congress leader Anand Sharma, however, said: “Unless the prime minister replies, each notice should be treated as a fresh one.” To this Kurien, said: “I am ready to allow discussion, are you ready to move the motion?” Congress leaders then said they will not start the debate unless Prime Minister Narendra Modi is present in the house.

Janata Dal-United leader Sharad Yadav said the “capitalists” after 68 years of independence are saying that parliament should run. “They must know 125 crore Indians have chosen the parliament… They want to run the parliament?” he said. Leader of House Arun Jaitley questioned if the common man wants parliament not to function.
With Congress members creating a ruckus, the house was adjourned till noon.