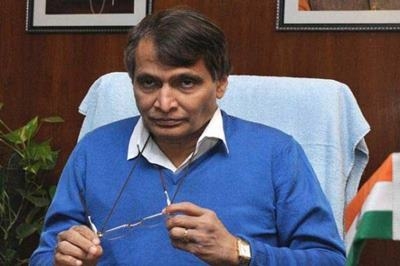 Hyderabad : Union Railway Minister Suresh Prabhu today reviewed the ongoing ‘Passenger and Customer Facilitation Fortnight’ celebrations which commenced on May 26 with South Central Railway General Manager P K Srivastava here. Srivastava appraised Railway Minister, who made a transit halt in the city, of the various plans and programmes under implementation all over the SCR network to reach out to rail passengers and users during the fortnight, a SCR release said. “The General Manager briefed the Minister on the large scale commencement of the fortnight celebrations which saw the launch of Wi-Fi facility and inauguration of new booking counters to ease passenger rush and ensure speedy disbursal of general tickets at Secunderabad Railway Station. “The General Manager detailed the initiatives undertaken at all divisional levels, with the Divisional Railway Managers and other officials personally reaching out to the rail users at various Railway Stations,” it said. The Railway Minister reviewed the report pertaining to ‘Passenger and Customer Facilitation Fortnight’ celebrations on SCR submitted by General Manager and expressed extreme happiness on progress of South Central Railway on the programme, it said. The Minister stated that the Railway Board can take SCR as a model Zone in attaining the objectives set for the Fortnight long celebrations, the release added.