Protest escalates in Punjab over alleged desecration of religious texts 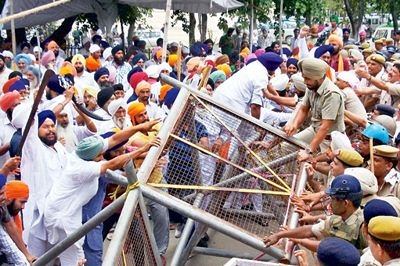 Kotkapura (Punjab): Protests in Taran Taran village has escalated over the rumors of alleged desecration of religious texts. On Monday, more than 100 pages were reportedly found scattered on a street that led to a local Sikh temple, which the Sikh leaders claimed to be torn from a copy of the Holy Scripture, Guru Granth Sahib, that was allegedly stolen in June this year. Violence broke out in Punjab’s Kotkapura city on October 14 after Sikh protesters and police clashed, where reports of stone pelting by protesters and counter baton charge and open firing by the police came to fore.