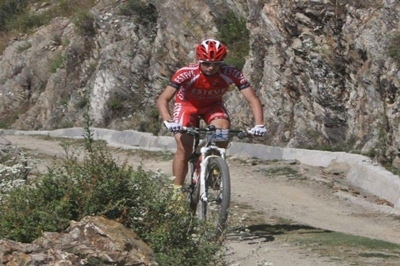 Gada-Kuffer (Himachal Pradesh): Top Portuguese cyclist Luis Leao Pinto won the first stage of the MTB Himalaya, one of the world’s toughest mountain bike races, on Day 1 after the endurance race was flagged-off from The Ridge in Shimla.

The World No.9, who won here in 2013 and will now wear the leader’s yellow jersey, completed the journey from the state capital to here in three hours, 12 minutes and seven seconds, 2:51 minutes on Sunday — ahead of Andi Seewald of Germany, who finished second. Seewald, who finished third last year, was leading the race at one point but was later overtaken by Pinto. Spaniard Pau Zamora completed the first stage of the off-road race in third place, clocking 3:16:30.

Out of the total 86 km, the bikers competed only for 71 km. The track for the first day, named Bhalku’s Epiphany, reached a maximum elevation of 2,299 metres and an elevation gain of 2,026m. The trail was relatively easy and took the riders mostly through pebbled country tracks. The route started from the state capital and went to Mashobra. From there, the bikers rode through Sanjauli, Narkanda, Sitapur, Baikhalti, Sarog and Dharampur before finally ending at Gada-Kuffer, where the riders were scheduled to halt overnight.

Out of the 88 entries, only 78 riders arrived for the start with 10 dropping out. Day 2 will see the bikers head to Khegsu, which is 107 km from here. The eight-day race, with a day’s break in the middle, takes cyclists through some of North India’s most arduous and rugged terrains in a gruelling adventure comprising of cycling and hiking across 550 km of scenic, unchartered territory. The race will finish on October 4 in Shimla. The Himalayan Adventure Sports and Tourism Promotion Association (HASTPA) is the parent body of MTB Himalaya, now in its 11th edition, and also its organisers while Hero Cycles are the main sponsors.