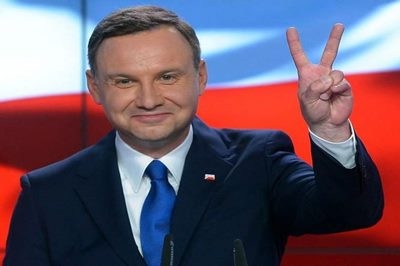 Warsaw: Conservative lawyer Andrzej Duda was today sworn in as Poland’s president, promising generous social benefits and calling for a greater NATO presence in the region amid concerns over the perceived threat from Russia.

The 43-year-old devout Catholic, who is allied with the populist Law and Justice (PiS) opposition party, took over from liberal Bronislaw Komorowski, whom he unexpectedly defeated in a May vote.  Komorowski is close to the governing centrist Civic Platform (PO) that has been in power since 2007 but is now trailing PiS in opinion polls ahead of an October general election. Stressing security, Duda called on the NATO defence alliance to do more for the region. “All of us in central-eastern Europe need a greater NATO presence here given the current difficult geopolitical situation,” he told parliament, referring to Russia’s meddling in neighbouring Ukraine.

He said he hoped that “that would be guaranteed explicitly” at the next NATO summit in Warsaw next year. At home Duda pledged to introduce the social benefits he promised in fiery campaign speeches, including new tax exemptions and a lower retirement age, which the PO government had gradually pushed back to 67 years. He also promised to better defend Poland’s interests abroad: “We need to ensure a cohesive European Union but in such a way that while doing so our interests are also taken into consideration.”

The president of the central European powerhouse of 38 million people has limited powers, which include steering defence and foreign policy and the right to veto legislation. Duda became in 2008 an aide to Lech Kaczynski, the late president who died in a 2010 plane crash in Russia. He was elected to the Polish parliament in 2011, then to the European Parliament last year. But he was not well-known before Lech’s controversial twin brother Jaroslaw Kaczynski — a former prime minister and current leader of PiS — anointed him as presidential candidate. An avid skier, Duda is married to Agata, a high-school German teacher. The couple has one daughter.