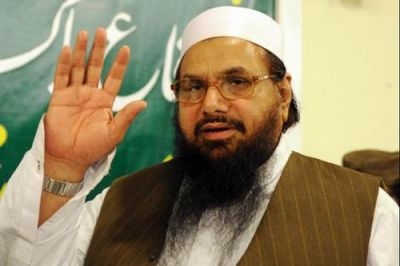 Karachi:  Unfazed by sanctions imposed by the government, Mumbai 2008 attacks mastermind Hafeez Saeed-led militant outfit Jamaat-ud-Dawah (JuD) has launched an ambulance service here in southern port city of Pakistan.  The service was started by JuD controlled charity Falah- i-Insaniyat Foundation (FIF) yesterday and inaugurated by none other than Saeed, declared as militant by the UN and the US.

The ambulance work service is our key area for (charity) for which we are known in Pakistan,” Saeed told reporters.
He said his organisation did not face resistance in any welfare project from the government. “We are not going to abandon these projects. A certain class and a certain group are targeting our organisation for a certain agenda,” he said. Saeed said his organization was active in far flung areas and have not decided to expand its charitable work in the main cities to facilitate the maximum number of people.

The FIF plans to operate a fleet of 15 ambulances in Karachi, a metropolis of more than 18 million people.
Saeed said that already ambulance service was active in 118 cities across the country. The JuD and FIF have also set up camps in different parts of the country to collect funds for what they call “public welfare works”. The curbs came as ministry of interior included both JuD and FIF in the list of banned entities and Foreign Office said that assets of all banned organisations have been frozen.

But the announcement to start ambulance service shows that Pakistan government was unable to match its words with actions when it comes to groups like JuD. India has repeatedly demanded Pakistan to hand over Saeed for questioning over his role in the 2008 Mumbai attacks that claimed 166 lives.