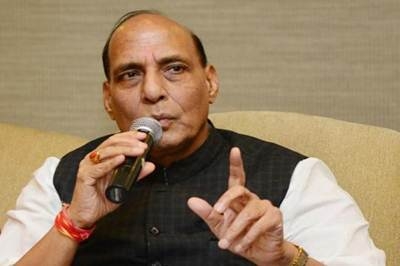 New Delhi: No Minister in the Narendra Modi government is ‘ashakta’ (powerless) and all of them believe in the philosophy of ‘less talk and more work’, Home Minister Rajnath Singh said today. “What do you think? Koi ashakta nahi hain. Sabhi log sashakta hain (No one is powerless. All are empowered). We talk less but work more,” he said at a press conference here. He was replying to a question on whether Ministers in the Modi government wielded any power. He, however, hastened to add that it was Prime Minister Modi who was running the government. “Nobody should have any doubt…the Prime Minister is running the government,” he said.

The Home Minister said as far as government’s administrative system is concerned, no good things can be achieved with a weak administration. “Administrative system has to be strong and effective. There is no such problem as of now. There might be in the past. That is history now,” he said. Asked whether the Prime Minister speaks too much in comparison to his Ministerial colleagues, as alleged by Rahul
Gandhi, Singh said the PM speaks whenever there is a necessity. “In my case, I get publicity even without speaking,” he said. To a question about whether his ‘aache din’ (good days) were when he was BJP President or have they come after he became Home Minister, Singh said “Hum sada bahar hain(I am a man for all seasons).” The Home Minister said the NDA government under Modi was marching ahead with the development agenda.