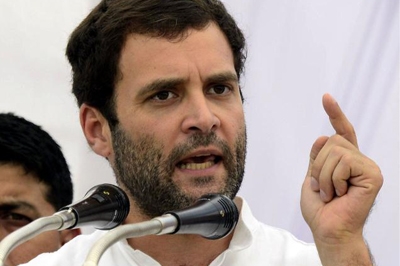 Congress has been protesting in Parliament on National Herald issue alleging political vendetta after the Delhi High Court refused to quash summonses to its leaders including party chief Sonia Gandhi and Rahul. The disruption of Parliament proceedings has led to delay in taking up of Goods and Services Tax Bill that seeks to bring in a uniform indirect tax regime across the country.

“Congress party had brought in the GST. Modiji and Jaitleyji had vehemently opposed it. They had called it all sorts of names. They rubbished it, said it cannot be done…it’s completely nonsense,” Rahul said, referring to Prime Minister Narendra Modi and Finance Minister Arun Jaitley.

“We on the other hand were trying to push GST. GST is important because it makes India less complicated. It allows goods to move. It removes red tapeism. We are hundred per cent proposers of GST,” the Congress leader said. The Congress had stalled passage of the GST Constitution Amendment Bill in the last session of Parliament over its demand that a revenue-neutral rate not higher than 18 per cent be mentioned in the Constitution Amendment bill. It is also opposed to states being given powers to levy additional 1 per cent tax on supply of goods over and above GST rate.

“We have three differences with the BJP on the GST. You know what those are. There is that dispute mechanism where we feel that it should be effective. People who are involved with the dispute should not be the resolvers of the dispute,” Rahul said.

“We do not want government servants and others to have a huge tax burden. That is why we want to put a roof on it. We want to put a limit on it. They (BJP) don’t. That’s the difference,” Rahul said.

During his interaction with the editors and senior journalists here in the presence of Chief Minister Tarun Gogoi, Rahul Gandhi off the record discussed with them the prevailing political scenario of the country, Assam and the North East region, the issue of illegal immigration from Bangladesh and India’s foreign policy.

He was confident of the ruling Congress under Tarun Gogoi retaining power for the fourth consecutive term in the 2016 Assam Assembly election.