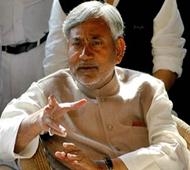 JD-U general secretary K.C. Tyagi told the media that Nitish Kumar was formally endorsed by the party leaders and workers from across the country at the JD-U national council meeting in Patna.

“Nitish Kumar’s election as national president was endorsed by the party at its national council meeting,” Tyagi said.

“With Nitish Kumar as JD-U president, the party will play a more active role in national politics in the coming days,” Singh said.