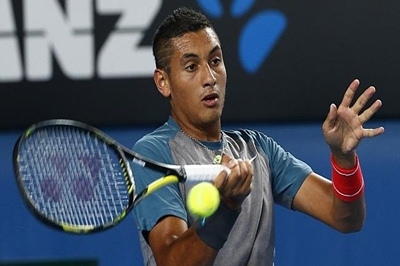 Kuala Lumpur: Controversial Australian tennis player Nick Kyrgios will return to World Tour battle, loaded with the dual challenge of avoiding a one-month suspension while attempting to add a positive finish to a tumultuous season.

Kyrgios will play his first Association of Tennis Professionals (ATP) event since being warned with a suspended 28-day ban and $25,000 fine for sledging Swiss star Stanislas Wawrinka in Montreal, Canada, last month. When Kyrgios contested the US Open in New York, he was not subject to ATP sanctions — but he is this week in Kuala Lumpur at the Malaysian Open, news.com.au reported on Sunday. Kyrgios was charged with aggravated behaviour after courtside microphones heard him tell Wawrinka that fellow Australian Thanasi Kokkinakis had slept with Wawrinka’s girlfriend Donna Vekic.

Seeded seventh in Malaysia, Kyrgios plays Colombian Santiago Giraldo in the first round as he chases his first ATP title. Sidelined after being overlooked for Australia’s Davis Cup semi-final with Great Britain, Kyrgios will play his first match since losing in the first round of the US Open to Andy Murray. “It is definitely a special tournament not only for me but also my mum. I also have a lot of relatives in Malaysia so there is added pressure for me to do well,” Kyrgios said.

“But I enjoyed playing in Kuala Lumpur last year and felt really comfortable. I think I can do well in Malaysia. I am feeling quite good at the moment, this will be the second time I will be playing in KL and I am already quite used to the conditions,” he said.