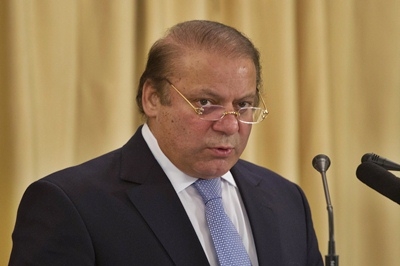 However, here at the UN headquarters Ban’s spokesman only said in a statement that during their meeting “the secretary-general stressed the necessity for Pakistan and India to continue their peaceful dialogue”.  The statement said that they also discussed “the fight against terrorism and violent extremism” and that Ban also asked Pakistan “to continue engaging Afghanistan in order to help stabilize the country”. India considers the Kashmir dispute a bilateral issue and opposes any international involvement.

However, when Sharif spoke soon afterward at the UN Summit on sustainable development goals, he focused on development and stayed away from bilateral or international issues. He said that “development strategies remain first and foremost national undertakings”. While most of the speakers stuck to development themes, a few like Presidents Alexander Lukashenko of Belarus, Nicolas Maduro Moros of Venezuela and Rafael Correa made anti-West statements. But Nawaz passed up on bilateral issues.

Nawaz will have another opportunity next week during the annual general debate of the General Assembly to raise the Kashmir issue. Sharif is listed as a speaker on Wednesday during the debate, and traditionally that is forum for airing bilateral and other grievances. Every year Pakistan rakes up the Kashmir issue there.