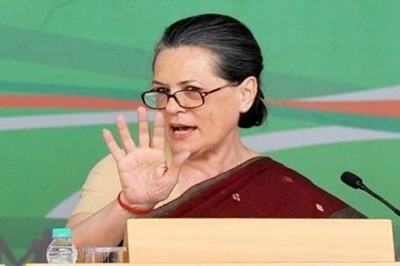 New Delhi: The government on Tuesday criticised Congress president Sonia Gandhi for charging it with political vendetta in the National Herald case, and denied that it has no role to play in it.

“The National Herald case is under the court’s jurisdiction and the government has no role to play in it,” Union Minister of State (Independent Charge) for Skill Development and Entrepreneurship Rajiv Pratap Rudy told media here.

Earlier, asked by reporters if the case was an instance of political vendetta, Sonia Gandhi said: “I leave it on you to judge.”

She emphatically denied that she was upset. “Why should I be upset? As I told my friends, I am Indira Gandhi’s daughter-in-law and I am not scared of anybody,” she said after a meeting of party lawmakers.

In Parliament, the Congress protested in both Houses, raising allegations that Bharatiya Janata Party leader Subramanian Swamy is targeting its leaders.

Sonia Gandhi and Rahul Gandhi have been asked to appear in court on December 19 in connection with the case, which is the earliest possible date given by the court.

“Arguments on the mater were reserved on December 4. We were told over the phone yesterday about the pronouncement of judgment and saw the copy online.

We made it clear to the honourable magistrate today that each accused is extremely keen, ready and willing to appear at the earliest. We were seeking exemption only for today,” Congress spokesperson and senior advocate Abhishek Manu Singhvi told the reporters here.

The paper’s fortunes were closely tied with those of the Indian National Congress. Post Independence, it shut down for two years from 1977 following Indira Gandhi’s defeat in the 1977 general elections that followed the Emergency.

By 1986, the paper again faced the prospect of closure but was revived a year later following Prime Minister Rajiv Gandhi’s intervention. The Lucknow operations of the paper were shut down in 1998 and much of its property auctioned off under court orders to settle outstanding debts.

In January 2008,discussions about closure began and on April 1, 2008, the paper’s editorial announced that it was temporarily suspending operations. The paper had failed to modernise its print technology and had not computerised at the time of suspending operations and had been making losses for several years owing to lack of advertising revenues and overstaffing.

At the time of its closure T V Venkitachalam was its editor-in-chief.

The National Herald, before its closure was being run by Associated Journals.

There were reports that the paper was being revived under journalist Suman Dubey, technocrat Sam Pitroda and the newly incorporated Young India Company headquartered at Herald House.

The paper was to have come out by Children’s Day in 2011 but Rahul Gandhi, a member of the board of the Young Indian Company has denied any plans on the part of the company to revive the paper.

On August 17, 2015 it was reported that the Enforcement Directorate had decided to close the case citing “technical reasons”.

Subsequently on September 18, 2015 the Enforcement Directorate decided to reopen the case.