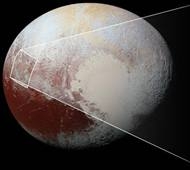 Washington – Far in the western hemisphere, scientists on NASA’s New Horizons mission have discovered what looks like a giant “bite mark” on Pluto’s surface.

The team suspect it may be caused by a process known as sublimation – the transition of a substance from a solid to a gas.

The methane ice-rich surface on Pluto may be sublimating away into the atmosphere, exposing a layer of water-ice underneath.

The data from the New Horizons spacecraft indicate that the plateau uplands south of Piri Rupes are rich in methane ice.

Scientists speculate that sublimation of methane may be causing the plateau material to erode along the face of the cliffs, causing them to retreat south and leave the plains of Piri Planitia in their wake.

The data also show that the surface of Piri Planitia is more enriched in water ice than the higher plateaus.

It may indicate that Piri Planitia’s surface is made of water ice bedrock, just beneath a layer of retreating methane ice.

Because the surface of Pluto is so cold, the water ice is rock-like and immobile.

The images were obtained by New Horizons at a range of approximately 33,900 kms from Pluto, about 45 minutes before the spacecraft’s closest approach to Pluto on July 14, 2015.

Earlier, in yet another example of Pluto’s fascinating and abundant geological activity, New Horizon captured nitrogen ice glaciers carrying an intriguing cargo – numerous, isolated hills that may be fragments of water ice from Pluto’s surrounding uplands.

These hills individually measure one to several miles or km across, a NASA statement said.

The hills, which are in the vast ice plain informally named Sputnik Planum within Pluto’s “heart” are likely miniature versions of the larger, jumbled mountains on Sputnik Planum’s western border.

Because water ice is less dense than nitrogen-dominated ice, scientists believe these water ice hills are floating in a sea of frozen nitrogen and move over time like icebergs in the Earth’s Arctic Ocean.

The hills are likely fragments of the rugged uplands that have broken away and are being carried by the nitrogen glaciers into Sputnik Planum.