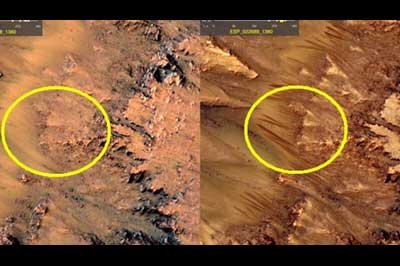 Washington: You have one more reason to book your date with the much-awaited Matt Damon-starrer science-fiction film “The Martian” this weekend. NASA’s Mars Reconnaissance Orbiter (MRO) has obtained first-ever definitive signs of liquid water flowing intermittently on the surface of present-day Mars.

In a paper published in journal Nature Geoscience, the team led by Lujendra Ojha, a researcher of Nepalese origin from Georgia Institute of Technology (Georgia Tech) in Atlanta, looked at streaks that form on some slopes on Mars during warmer times of the year, having previously suspected they might be caused by flowing, salty water.

Using an imaging spectrometer on MRO, they detected signatures of hydrated minerals on slopes where mysterious streaks are seen on the Red Planet. These darkish streaks appear to ebb and flow over time, appearing in several locations on Mars when temperatures are above minus 23 Celsius and disappear at colder times.

Ojha and his team found the hydrated salts only when the seasonal features were widest, which suggests that either the dark streaks themselves or a process that forms them is the source of the hydration. “In either case, the detection of hydrated salts on these slopes means that water plays a vital role in the formation of these streaks,” Ojha said.

The discovery hints towards a full-fledged life that may have had sustained on Red Planet in the past.

According to Alfred S. McEwen, professor of planetary geology at University of Arizona, the team identified waterlogged molecules – salts of a type known as perchlorates. “That’s a direct detection of water in the form of hydration of salts. There pretty much has to have been liquid water recently present to produce the hydrated salt,” Dr McEwen noted.

NASA provided details of this major science during a news briefing at the James Webb Auditorium at NASA headquarters here. “Our quest on Mars has been to follow the water,’ in our search for life in the universe, and now we have convincing science that validates what we’ve long suspected,” said John Grunsfeld, associate administrator of NASA’s Science Mission Directorate in Washington. “This is a significant development, as it appears to confirm that water — albeit briny — is flowing today on the surface of Mars,” he emphasised. Ojha originally discovered signs of water on the Martian surface when he was studying at the University of Arizona, Tucson, in 2011. “Our findings strongly support the hypothesis that recurring slope lineae form as a result of contemporary water activity on Mars,” Ojha pointed out. For the study, scientists developed a new technique to analyse chemical maps of the Martian surface.

They found striking fingerprints of salts that form only in the presence of water. Adding to the growing literature on possible life conditions on the Red Planet, NASA’s Mars rover Curiosity found in April this year that it is possible that there is liquid water close to the surface of Mars. The explanation was that the substance calcium perchlorate has been found in the soil which lowers the freezing point so the water does not freeze into ice, but is liquid and present in very salty salt water – brine.

Nearly 4.5 billion years ago, Mars had six and a half times as much water as it does now and a thicker atmosphere. But most of this water has disappeared into space and the reason is that Mars no longer has global magnetic fields, which we have on the Earth.