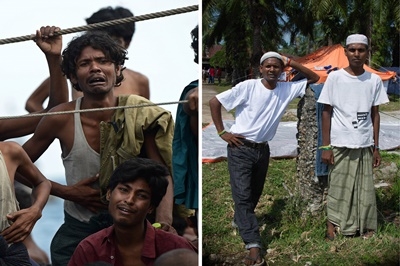 Yangon: Myanmar’s navy found 727 people crammed on a fishing boat in its waters, the Ministry of Information said in a Facebook post today, adding the would-be “Bengali” migrants had been towed to an island. “Altogether 727 people — 608 Bengali men, 74 women and 45 children — in a fishing boat have been arrested as a Myanmar Navy ship found them this morning in the delta,” the statement said.

The discovery comes as a Myanmar delegation joins an international conference in Bangkok to address a migrant crisis that has erupted since the start of May, leaving around 3,500 people on Thai, Malaysian and Indonesia soil and an estimated 2,500 more stranded at sea. The majority of the migrants are persecuted Rohingya Muslims from Myanmar’s western Rakhine State or people fleeing poverty in neighbouring Bangladesh. Photographs on the ministry’s Facebook page published today afternoon showed bare-chested men on the stern deck of an old fishing boat packed tightly in rows, while women appeared to be kept below deck. It was unclear where the migrants were from and where they were headed.

Record numbers of people from the region are believed to have made the journey south so far this year ahead of the looming monsoon. The Navy towed the “Bengali boat people” to a nearby Myanmar island, the ministry said, without giving further details. More than 200 migrants were found adrift last week near waters off the Rakhine State in western Myanmar where the 1.3 million Rohingya live in dire conditions. The majority were taken to the Bangladesh border to be repatriated, although it is not clear if they have been allowed to cross or if Rohingya from Myanmar were among the group.

Myanmar does not recognise the Rohingya as an indigenous ethnic group and officials routinely refer to them as “Bengalis” from across the border.