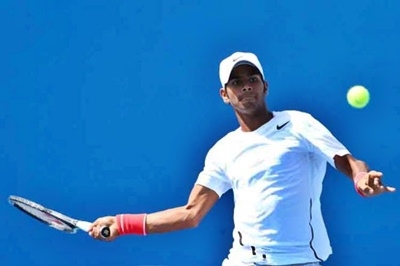 New Delhi: A doubles title at the prestigious Wimbledon Championships has put him in the spotlight but Sumit Nagal says he is more keen to excel in the singles and has set himself a target of breaking into top-300 by the end of this year. 17-year-old Nagal, who trains at Schuttler Waske Tennis University near Frankfurt won the junior boys doubles title with Vietnam’s Nam Hoang Ly.

“My main focus is on singles. My goal is to be in top 300 by this year so let’s see where I can take myself. I will do my best. Let’s see what I can do for my country,” he told PTI from Frankfurt, Germany. Nagal, who is training with Meriano Delfino since last July, is ranked 745 on the ATP charts and is yet to turn Pro. Son of a school teacher, Nagal described the experience of playing at the hallowed courts of AELTA as “phenomenal”. He said the fact that Nam Hoang Ly is the first player from his country to win such a prestigious trophy gives him immense satisfaction. I am super happy that we won the title. Coming from such a big continent, and seeing such a low number of people doing well out of billions, it just feels great. And to be honest, I feel even more happy because Nam Hoang Ly is the first Vietnamese ever to win such a big title,” Nagal said.

“In that sense, we made history and my name will always be there, so nothing can beat that feeling.” The defeat in the singles first round rankles him. “It indeed is disappointing. I got there late so I did not have enough time to prepare myself for the grass. But it was not my fault as I got my passport from the Embassy a week later for no reason,” he lamented. Yet he enjoyed his stay there. The experience was phenomenal. It’s just an amazing place with amazing people plus in a beautiful city. It’s just a perfect tournament,” he said. Nagal also recounted early days when his parents struggled to support him.  “The beginnings are always rough. My parents sacrificed a lot for me which I don’t know if it’s possible for anyone else in this world. I left home when I was 10,” he said. Nagal has been supported by India’s veteran star Mahesh Bhupathi. It was Bhupathi who spotted him during a camp at RK Khanna Tennis stadium and decided to back him.

Nagal, who has a booming forehand, did not forget to mention the role Bhupathi has played in his fledgling career. “He has supported me on and off the court. He helped me in everything. I am very lucky to have him in my team. What he is doing is just fabulous,” he said. Bhupathi was modest when asked about his support to Nagal. Sumit is the one who is playing and not me,” the winner of first ever Grand Slam title from India, told PTI.