Milkha Singh happy to have been mentioned by President Barack Obama 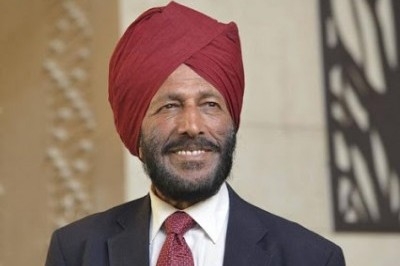 New Delhi: A pleasantly surprised Milkha Singh today said that United States President Barack Obama mentioning him as one of the national icons was all the more satisfying as it came from an inspiring personality like him. Addressing a Town hall event at Siri Fort auditorium here on the third and final day of his visit to India, Obama lauded Milkha and Mary Kom among others as achievers, while making a point that courage and humanitarian values unify both the nations.

Milkha said “those who live for the good of the country and those who bring laurels to the country always remain in the hearts of people”. “I am very happy that he mentioned my name along with those of Mary Kom and Shah Rukh Khan. It is a pleasant surprise that he remembers my name and mentioned my name as one of the national icons. I thank him for that,” Milkha told PTI from his Chandigarh home.

“It is all the more heartening that it came from an inspiring person like him. His grandfather worked as a cook and he is from a humble background who rose to such a high position. It is certainly something I will cherish,” said octogenarian Milkha, who missed a 400m bronze medal by a whisker in 1960 Rome Olympics. Milkha, also known as ‘Flying Sikh’, congratulated Prime Minister Narendra Modi for his “achievement” of being able to bring Obama to India for the second time during his presidency.

“It is an achievement for our Prime Minister that Obama came to India for the second time and that also to grace the Republic Day Parade,” Milkha said.