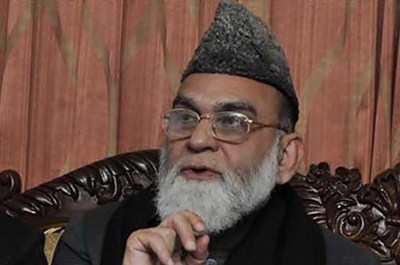 Mumbai: Manipur Governor Syed Ahmed, who passed away on Sunday, was laid to rest with full state honours at the Rehmatabad cemetery in Byculla in south Mumbai on Monday morning, officials said. Ahmed, 70, passed away after battling cancer at the Lilavati Hospital in Bandra, where he was admitted last week, his son Syed Zeeshan Ahmed said. Ahmed is survived by his wife Syed Hasan Tara, two daughters and son Zeeshan Ahmed.

The body of Ahmed, a prominent Congress leader and former Maharashtra minister, was accompanied by a host of senior political leaders from different parties, family members and a large number of admirers from different walks of life. Maharashtra Governor C.V. Rao on Monday morning visited Nagpada – where his body was kept for people to pay their last respects – and paid homage to the departed leader.

A former Congress leader and Maharashtra minister, Syed Ahmed was sworn-in as governor of the northeastern state of Manipur on May 16. Earlier, he was governor of Jharkhand since September 2011. He was elected to the Maharashtra legislative assembly five times on Congress tickets from the Nagpada constituency in south Mumbai and later served as a minister in two governments, handling various portfolios.

In a condolence message to Ahmed’s wife Syed Hasan Tara, President Pranab Mukherjee said: “I am sad to learn about the passing away of Dr. Syed Ahmed. He served the nation with distinction in different capacities during his public life.” President Mukherjee said Ahmed’s services to the nation as the governor of Jharkhand and Manipur would always be remembered.

“I pray to the almighty to give you and other members of the family strength and courage to bear this irreparable loss,” he said. Vice President Hamid Ansari in his message said Syed Ahmed was “a leading figure of Maharashtra’s political firmament and his departure leaves a large void”.

“A humanist, he was dedicated to working for the uplift of the weakest sections of society. In his capacity as the minister for housing, slum improvement, house repairs and reconstructions in the state government, he worked to address the issues facing the homeless and the slum dwellers in Maharashtra,” Ansari said.

The vice president also said Ahmed had a special role in the advancement and welfare of minorities in India, particularly in Maharashtra. “He was also a scholar, having written on topics as diverse as revolutionary poetry to the role of Muslims in India’s freedom struggle,” he added.

“Dr. Ahmed had a sincere urge to address the problems of the common man. He was a writer and poet too. I convey my heartfelt condolences to the bereaved family,” Rao said in a condolence message. Senior leaders of Maharashtra, including state Congress president Ashok Chavan, Leader of Opposition in the assembly Radhakrishna Vikhe-Patil, former union minister Gurudas Kamat and the Mumbai Congress also condoled Ahmed’s death.

Besides being a politician, Ahmed was an academician and litterateur with Master’s degrees in Hindi and English and a Ph.D. in Urdu. Some of his prominent works include ‘Kafas Se Chaman’, ‘Jang-e-Azaadi Me Urdu Shayan’, ‘Maktal Se Manzil’ and his autobiography ‘Pagdandi Se Shahar Tak’.