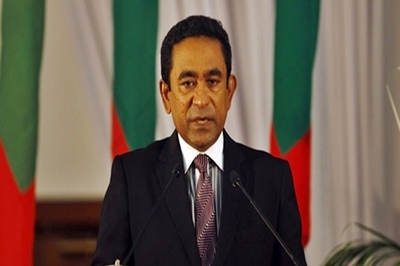 Male/New Delhi: Maldivian President Abdulla Yameen Abdul Gayoom and First Lady Fathimath Ibrahim had a lucky escape today as an “explosion” occurred aboard the speedboat that they were travelling in after concluding their visit to Saudi Arabia to perform the annual Hajj pilgrimage. Maldivian authorities said that President escaped unhurt while his wife suffered “not serious” injuries. While the reason of the blast is yet to be ascertained, it is most likely to have taken place in the engine compartment. “The explosion happened while the President and his wife were returning from the airport to Male after concluding their Haj visit. The President did not get injured but his wife did and is being treated at the Indira Gandhi Memorial Hospital (IGMH). The injuries are not serious as per reports we have received so far,” Maldivian High Commissioner to India Ahmed Mohamed told PTI in New Delhi. He said that the President Yameen and others were quickly transferred to an accompanying police speedboat and brought to Male.