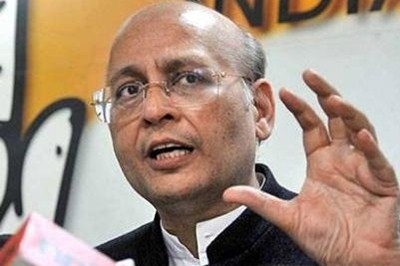 New Delhi : Congress spokesperson Abhishek Manu Singhvi on Tuesday asserted that the National Herald Case has no base and the party would fight it within the confines of the law and exercise every remedy available to it.

“This has been filed directly by a BJP member, both the party he belongs to and himself have a long history of political and personal antagonism.

We believe that the case has absolutely no legs to stand upon and we shall fight it within the confines of the law at every forum available to us and exercise every remedy available to us,” Singhvi told ANI.

“We have an unassailable extremely strong case. This is nothing but political vendetta. We have seen it in a series of cases.

From Virbhadra Singh during the wedding ceremony of his children through Chidambaram, and to many other examples,” he added.

Meanwhile, Bharatiya Janata Party (BJP) leader Subramanian Swamy and Singhvi reached the Patiala House Court today.
The Congress might seek an adjournment in the case in the court.

Earlier, the Delhi High Court had quashed the pleas of Congress president Sonia Gandhi and party vice-president Rahul Gandhi challenging of summons issued to them in the National Herald case.

The High Court has also declined to grant Sonia Gandhi and Rahul Gandhi exemption from personal appearance before trial court in the matter.

Apart from the Gandhis, Congress treasurer Motilal Vora, family friend Suman Dubey, and party leader Oscar Fernandes had moved the High Court for quashing of summons to them by a trial court on Swamy’s complaint.