IS militants smash ancient statues to rubble in Iraq’s Mosul 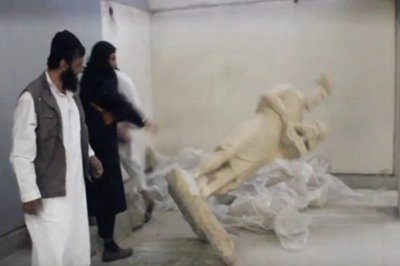 London : A new video released by the Islamic State (IS) shows militants destroying statues housed in a museum in the Iraqi city of Mosul using sledgehammers and drills. The footage showed men clad in clack pushing over statues and smashing them with one of them declaring the artefacts “false idols.” Another militant in the video is shown drilling through an idol that appears to be a stone winged-bull Assyrian protective deity, dating back to the 9th Century BC, reported the BBC. The clip also showed statutes being destroyed at an archaeological site known as the Nergal Gate.

Analysts said that the artefacts are unique and priceless although the museum also house copies of some items. Meanwhile, in the wake of the incident, the World heritage body UNESCO called for an emergency meeting of the UN Security Council to discuss ways to protect Iraq’s cultural heritage. UNESCO head Irina Bokova said in a statement that the attack was far more than a “cultural tragedy” and added that it was also a security issue as it fuels sectarianism, violent extremism and conflict in Iraq.

Ihsan Fethi, an Iraqi professor of architecture based in Amman, Jordan, termed the incident “a terrible loss and an unbelievable act of cultural terrorism.” The news followed reports that said that the IS burnt down thousands of rare books, documents, manuscripts housed in Mosul Library.