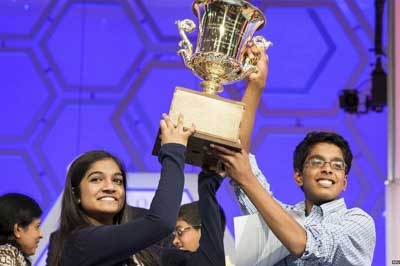 Washington :  Scripting history, two Indian-American children on Friday won the world’s prestigious spelling bee contest in a tie, the second time in a row, maintaining the community’s complete dominance in the competition.

Vanya Shivashankar, 13, and Gokul Venkatachalam, 14, were declared co-champions of the Scripps National Spelling Bee as they together lifted the golden trophy amid confetti and applause in a repeat of last year’s surprise tie – a feat achieved by Indian-Americans for the second consecutive year.

The two winners will each receive over USD 37,000 in cash and prizes. With this year’s success, young Indian-Americans have won as many as 14 of the past 18 contests and the eighth year in a row. This is also the first time a sibling of a former champion won. The third spot was also bagged by an Indian-American, Cole Shafer-Ray from Oklahoma.

“This is a dream come true. I have wanted this for such a long time,” Shivashankar, the sister of 2009 champion Kavya Shivashankar, said while dedicating the award to her grandmother who passed away in October. Appearing for the fifth and the final time for the contest, the eighth-grader from Kansas confidently spelled words like ‘cytopoiesis’, ‘bouquetiere’ and ‘thamakau’ before she was asked to tackle the golden word.

Basketball enthusiast Venkatachalam spelled words like ‘poblacion’, ‘caudillismo’ and ‘nixtamal’ before official bee pronouncer Jacques Bailly broke the news to him that Shivashankar had correctly spelled ‘scherenschnitte’, the German-derived word for artistic paper cutting. Asked later what was on his mind when he heard the word ‘nunatak’, his winning word, he said: “Me and Vanya are going to be champions.”

On Thursday, racist trolling cast an ugly pall over social media as the reaction from some of the nearly one million people viewing the finals live posted biased views about the domination of non-Americans on the contest. “One year I wish an American kid could win,” read a Twitter post. “The kids in the spelling bee should only be AMERICAN,” a third tweet said.