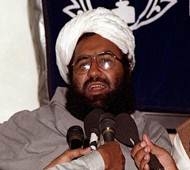 New Delhi: New Delhi has taken up with Beijing at a high level te issue of China vetoing a UN bid to declare Pakistan-based Jaish-e-Mohammad’s leader Masood Azhar a terrorist

“We have taken it up with the Chinese at a fairly high level,” Foreign Secretary S. Jaishankar said at the launch of Carnegie India, the sixth international centre of the Carnegie Endowment for International Peace.

“It’s an issue that has to be pursued in the UN context,” he said.

India’s move to get January 2 Pathankot airbase terror attacks mastermind, Masood Azhar, banned by the UN was last week rebuffed for the second time by China, a close friend of Pakistan.

India had approached the UN in February to include Masood Azhar in the UN Security Council’s 1267 sanctions list, in the aftermath of the terror attack on the Pathankot airbase by JeM terrorists.

However, China requested the UN sanctions committee to keep on hold the move to ban Masood Azhar.

India has voiced disappointment at the “technical hold” put on its application to include the name of Azhar, in the UN sanctions list, and criticised the UN sanctions committee for adopting a “selective approach to combating terrorism”.