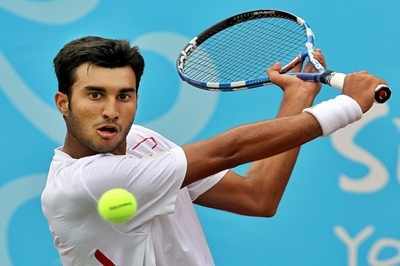 The Delhi boy’s 3-6 5-7 2-6 defeat in sweltering heat in the must-win fourth rubber means that India will remain in the Asia|Oceania Group 1 for next year’s competition while the top seeds and three-time Champions Czech Republic regained their place in the elite-16 nation World Group.

India needed Yuki to win to remain alive in the tie but the 23-year-old today lacked the required fighting spirit
despite that the hot and humid conditions were bothering the left-hander. Yuki lost both his matches here over the weekend after playing an excellent tie against New Zealand in July when hewon both the matches, including the deciding fifth one that helped India reach the Play-off stage.

The doubles loss for the fancied Leander Paes and Rohan Bopanna also hurt India’s chances in the tie. Since the fate of the two teams was sealed, the two teams decided not to play the dead fifth rubber between Somdev Devvarman and Lukas Rosol. India were trying to re-enter the World Group for the first time since March 2011 when they had lost to Serbia 1-4 in the first round.

After losing the first set, Yuki got five chances to break Vesley in the second but he could convert none. Not being able to convert three chances in the eighth game proved suicidal as one break could have turned the tide under challenging conditions. Vesley dictated the terms in the two hour and 14 minute contest as he played the entire match on Yuki’s backhand. And he served strong to wriggle out of a few tough situations.

The key to Vesley’s success was that he played with lot of control. He committed only three unforced errors in the opening set and was rewarded with his first ever win in live singles rubber in Davis Cup. Vesley played a lot of points on Yuki’s backhand to begin with and persisted with the strategy. He also improved his serve as the match wore on and set Yuki up for easy winners. The Indian made a better start than his first match but a flurry of errors pegged him back in the fourth game of the opening set. He lost four straight points to be broken at love and Vesley held the next for a 4-1 cushion.

Yuki could not find a way to negate the strategy Vesley adopted. The Indian was in danger of losing serve again in the sixth as Vesley smashed past Yuki for a winner to earn a break chance when he approached the net after picking a half-volley but could position himself well, leaving the court open. However, he saved it with a forehand winner. The break stayed with Vesley and the tall Czech closed the set in his favour without fuss. Vesley’s unreachable drop shot gave himtwo set points and he converted first when Yuki made forehand error.

Afters saving a break point in the very first game of the second set, Yuki had chances to grab a break from Vesley in the second and fourth games but each time Vesley came up with solid serves to stay away from danger. Yuki served the fifth at love and Vesley responded with an equally good game in the next, firing three aces for a 3-3 scoreline. Under a scorching sun and egged on by thousands of supporters, Yuki got enough chances to break Vesley in the eighth game but all three went abegging. Vesley committed his second double-faulted at 15-30 to hand Yuki two chances. Yuki had enough space to hit a pass winner but missed on first chance by a big margin. The Czech saved second with solid serve and later a third too.

At 5-5 Yuki, Yuki lost his serve, thanks to consecutive backhand errors. The third set was reduced as formality as India lost a brilliant chance to capitalise on home conditions and absence of world number five Tomas Berdych.