I want to try my hand at Formula 1: MotoGP champ Jorge Lorenzo 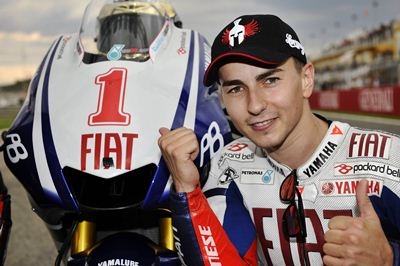 Greater Noida: Reigning MotoGP World Champion Jorge Lorenzo says one of his deepest desires is to one day move from two-wheelers to four-wheelers and try his hand at Formula 1.

“I have tried my hand in GP2. One of my oldest dreams is to try my hand in Formula 1,” Lorenzo said in an off-beat chat with IANS here during a few hours he spent at an event organised by Yamaha, for whom he rides.

GP2 is the main feeder racing series of Formula 1.

“So who knows, may be one day in the future I will race in Formula 1. But obviously I also cannot leave MotoGP because it is my passion. I am what I am because of MotoGP and I still have a lot to do in the sport,” added the three-time World Champion.

Apart from motorsports, the Spaniard is also interested in football, tennis and golf, swinging his club a couple of times at some course. “Yes, I like to play golf at times whenever I get some time.”

What about the time when he is not racing?

“I am a movie man. I watch a lot of movies when I am not racing. I love cinema, music and video games — my three hobbies. In cinema, I like watching movies of old actors like Jack Nicholson, Al Pacino and Robert di Nero.”

Though the season is over, the 28-year-old is in no mood to waste his time in leisure activities and wants to get back to training and action as soon as possible.

“I will start training because on November 8 I won the world title. Since then I have had to take part in many events and have been eating a lot too. I have not trained so I am becoming fatter. So I need to start training very quickly,” said the Yamaha rider.

Though teammate and arch-rival Valentino Rossi led the championship for most of the season, Lorenzo won the title only in the last race — Valencian Community Grand Prix — when he clinched the top spot in the race on November 8.

“I am a lucky person. I live my dream to be a MotoGP rider. I do not need any stimulation to keep myself motivated. I am very fortunate to have gotten this opportunity. I have achieved much more than I ever imagined; so I am very fortunate,” concluded Lorenzo, who won seven races in the 2015 season.