Huge haul of arms and ammunition recovered in Kishtwar in JK 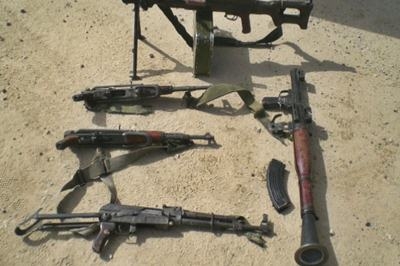 Jammu: Security forces today busted a militant hideout in Kishtwar district of Jammu and Kashmir and claimed to have recovered a large cache of arms and ammunitions including two AK-rifles, hand grenades and seven Under Barrel Grenade Launcher (UBGL) grenades. “In a joint operation, the troops of Delta Forces at Jangalwar and police unearthed a militant hideout and recovered a huge haul of weapons, ammunition and war like stores today from the densely-forested area of Nagini Got in the Bonjwa region of Kishtwar district,” the defence spokesman said.

He said information was received from a local about the likelihood of a militant hideout in Nagini Got following which a massive search operation was launched in the area spanning over two days in extreme weather conditions in the mountainous area.

“The hideout is believed to be of an alleged Hizb militant Mushtaq Ahmed Butt alias Mussa who used to operate in this region out of such hideouts before being killed by the security forces in 2011,” the spokesman said. General Officer Commanding (GOC), Delta Force complimented the troops who took part in the operation and commented that the recovery of this cache is in continuation of the sustained efforts of Delta Force towards dismantling of militant infrastructure and support base of remnant militants in Chenab Valley.