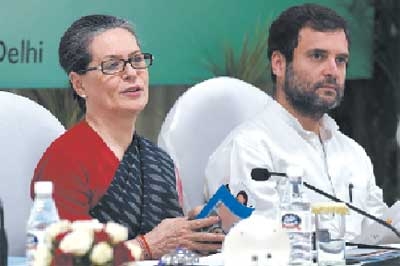 New Delhi : Bharatiya Janata Party (BJP) leader Subramanian Swamy who filed a caveat in the Supreme Court, urging it not to pass any order without hearing his side in the National Herald Case, said on Tuesday said that Congress vice-president Sonia Gandhi and party vice-president Rahul Gandhi are out of luck now as the apex court won’t intervene with the trial process.

“Due process of law will begin. If they want to try their luck in the Supreme Court, I think they have very little chance, because two courts have held that there is a prima facie case.

So, the Supreme Court would not like to intervene with the trial process,” Swamy told ANI.

“The magistrate Gomti Manoja went into every document. She had independent witnesses. She subjected me to examination thoroughly for 15 months, she considered my complaint and then she issued it…all during the UPA period,” he added.

Further clearing his stand, Swamy said that he will point out previous judgments where the Supreme Court has never entertained when two courts have held there is a prima facie case.

“I am working on the possibility that there has been money laundering, because the people who made the decisions are the same in all the three situations.

In National Herald, Motilal Vora is the chairman of the board of directors and Oscar Fernandez is the director. So, they are all the same people, so there must have been money laundering.

Young Indian has only five lakh rupees share capital, how did it get Rs. 5000 crore property from another company?” he asked.

Swamy further said that there is also some indication that they have taken a loan of Rs. one lakh from a company, where the owners confessed it was an entry-based company which indicates it was black money.

He said there should be another legal case on it, adding that he might ask the High Court to say that CBI and Enforcement Directorate should also be in this case.

Apart from the Gandhi’s, the court also dismissed the pleas of Congress treasurer Motilal Vora, family friend Suman Dubey and party leader Oscar Fernandez, who had moved the High Court for quashing of summons to them by a trial court.

On 26 June, the trial court had issued summons to the Congress leaders on Swamy’s complaint.

Swamy has complained about cheating and breach of trusts in the acquisition of Associated Journals Limited – the publisher of National Herald – by a company called Young Indian Limited, in which the Gandhis reportedly hold shares.

Meanwhile, the Congress said they would challenge the decision of the Delhi High Court which has refused to quash a lower court’s summons to Sonia Gandhi and Rahul Gandhi and four others in the case.