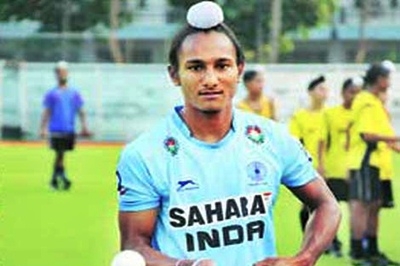 New Delhi: Promising midfielder Harjeet Singh will lead the 18-member Indian junior squad in their title defence at the upcoming 5th Sultan of Johor Cup to be played in Johor Bahru, Malaysia from October 11 to 18.

The squad, which was announced here on Monday, will have Dipsan Tirkey as the vice-captain, and will be coached by Harendra Singh. Most of the players in the current squad were part of the victorious campaign last year. The Indians will open their campaign against arch-rivals Paksitan on October 11 and will face Britain the next day. Their other first round matches will be against Argentina (October 14), Malaysia (October 15) and Australia (October 17).

“We are the defending champions and the boys are excited about retaining the title. We are not allowing pressure to take over us. The team is in a very good shape and confident to perform as per expectations,” Harjeet was quoted as saying in a Hockey India (HI) statement. Coach Harendra Singh was confident that his wards will produce a good performance and is looking forward to the campaign opener against Pakistan. The boys are confident of the tournament ahead and they aim to retain the title. Our opening match is against Pakistan and the boys are excited about their clash against them. The team has worked on their game as per each teams’ performance in the recent past,” he said. “We have spent time watching past videos, understanding where all did we make mistakes and how well do we ensure that the same is not repeated. The team is all geared up face the challenge ahead.”