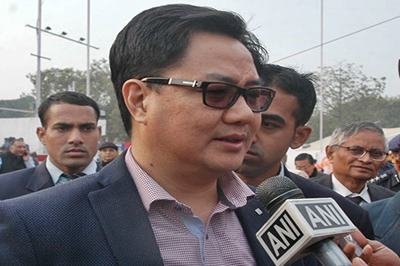 Shillong: Minister of State for Home Affairs Kiren Rijiju today said the impression that the Centre was “protecting tained ministers” was totally wrong as the reasons given were unfounded. The External Affairs Minister Sushma Swaraj had given factual explanations to all the charges against her in Parliament, Rijiju told reporters here.

“Thus the impression of government protecting tainted ministers is wrong,” he said, adding that six UPA ministers had to resign as they were either indicted by the CAG or by the Court. Defending his party’s opposition to such ministers continuing in office, Rijiju said, “Only when they were clearly found to be involved in the act of corruption causing huge lost to the exchequer of the country, then only we protested and demanded for the resignation of the ministers.”

“We are running a very very clean and efficient government under the leadership of Prime Minister Narendra Modi. In the past 15 months, not a single Union minister has been charged with corruption of even a single paise. No minister or staff of the ministers was ever found to be indulged in any undesirable act or any acts which amounts to corruption,” he said.

He accused the 44 Congress MPs and 9 Communist MPs in the Lok Sabha of disrupting Parliament and in the process snatching away the rights of majority of more than 480 MPs.