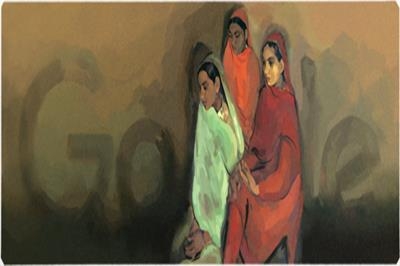 New Delhi – Paying their tribute to Amrita Sher-Gil on her 103rd birthday, search giant Google is displaying her painting ‘Three Girls’ as their doodle.

When a viewer clicks on the painting, he is directed to the wiki page of the painting maestro.

Amrita Sher-Gil was born on January 30, 1913 to a Punjabi Sikh father and a Hungarian Jewish mother in Budapest, Hungary. She died at a young age of 28 (on December 5, 1941) in Lahore.

She is considered among the most important Indian painters of the 20th century with 174 documented works created over the course of her brief career.