Girl devotee gets a taste of VIP darshan 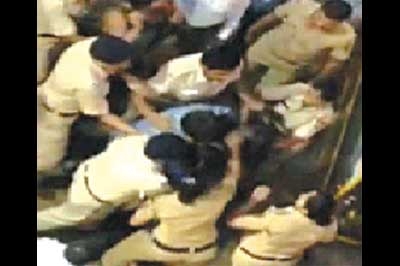 Mumbai: The Lalbaug Ganesh Mandal found itself embroiled in an unsavory row after a video of a purportedly mentally-challenged girl being beaten up by a lady police constable at a pandal went viral. Chief Minister Devendra Fadnavis and Home Minister Ram Shinde, who took suo motu cognizance of the incident, have asked Police Commissioner Javed Ahmed to conduct an inquiry and submit a report within two days.

Nandini Goswami (25), a resident of Mira Road, was in Mumbai with her parents for ‘darshan’. On September 25, the girl was fidgeting in the queue for a marathon 18 hours; at midnight her patience wore thin and she asked the police to accommodate her in the VIP queue. When she persisted with her demand and stepped out of her line, the women constables obstructed her from joining the VIP queue. There was a verbal exchange following which the lady constables are seen slapping and jostling her in the video.

A visitor on the Lalbaug Bridge caught the incident on camera and sent it to various WhatsApp groups. As the clip went viral, the police commissioner asked the Kalachawki police to inquire into the episode.

The alleged incident took place on Friday night when Nandini was visiting the ‘Lalbaugcha Raja’ pandal along with her parents. The local police have, however, disputed the sequence of events, as seen in the video.

A police officer said, “The footage which has gone viral shows only one side of the story – what happened inside the enclosure. Actually, in her attempt to get inside, the girl misbehaved with the cops. She threatened them and claimed that she is a black belt in karate; she also abused the three women constables on duty. Perforce, the cops took her to the police station.”

The girl was brought to the Kalachowki police station at 2 am on Friday night; early on Saturday morning she was asked to cough up Rs 1200 under Section 110 of the Indian Penal code. The police may now call the victim and the constables to record their statements; they will also check the CCTV footage.