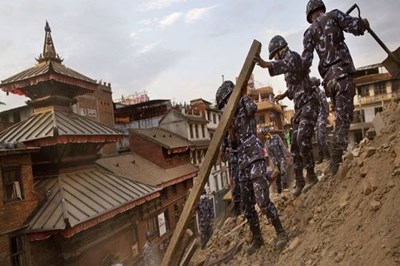 Kathmandu: The footfall at the iconic Pashupatinath Temple here has reduced after the deadly temblor struck Nepal and claimed nearly 8,000 lives.

“Now, you can enter the temple in very little time. We used to stand for hours before being able to seek Lord Shiva’s blessings. The tourists have stopped after that and many locals are also scared to enture now,” said 77-year-old Ram Avtar Jalan, an Indian tourist. “But, the santum santorum’s safety is a testimony to the almighty’s power,” Jalan said. “The sanctum sanctorum remained untouched, though there were damage to buildings in other parts of premises. I think it is nothing short of a miracle. My faith in Lord Pashupatinath has only become deeper after this experience,” said Govind Prasad Sharma, a regular visitor to the temple.

The iconic temple complex, suffered some damage in few of the outer buildings in the World Heritage Site, but the sanctum sanctorum was left untouched during the earthquake. The fifth century temple holds special significance for Hindus around the world and its historic cremation ghats witnessed funeral pyres burning for first two straight days after the tragedy, Nepal worst in over 80 years. “82 people were cremated here on the very day the deadly the earthquake hit us. It was a horrible sight. But, the next day, was even worse, when 152 bodies were brought in to the banks of the holy shrine here. Nine children have also been cremated,” Ritesh Kumar, an official at the temple’s cremationassistance centre, told PTI.

“For first two days, the funeral pyres did not stop. It burnt all night through to the dawn,” a priest at the ghat said, as he pushed the scorched wood into Bagmati. The death toll due to the earthquake on April 25 has reached 7,885 so far while the number of injured has shot up to 16,390, officials said.