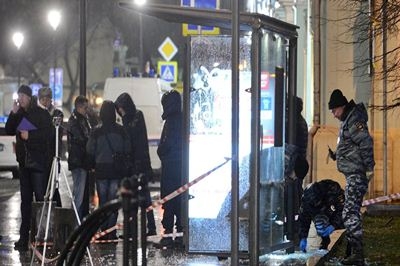 The device went off yesterday night on Pokrovka Street, a trendy area in central Moscow dotted with bars and restaurants.

Preliminary information suggests the makeshift explosive was thrown either from a car or a nearby residential building and hurt “several” people, another Moscow police spokesman, Andrey Galiakberov, told AFP.

A spokeswoman for the health department of the Moscow city hall said separately that four people received medical attention Monday night and three of them were hospitalised.

A fifth person turned to the authorities for help and was hospitalised today, she told AFP.

Smashed glass could be seen at the bus stop and several police cars, fire engines and an ambulance were at the scene, an AFP correspondent reported from the scene Monday night.

“I was at the bus stop and suddenly we heard a loud explosion. It was terrifying,” a 28-year-old woman identified as Ksenia told LifeNews.

“I first thought there were people shooting and I ran away from the bus stop,” she said.