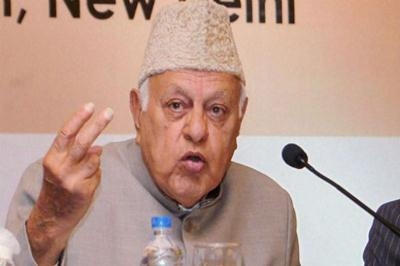 Jammu: Former Jammu and Kashmir chief minister Farooq Abdullah on Saturday slammed the students of Jawaharlal Nehru University (JNU) for holding open meeting to discuss Parliament attack convict Afzal Guru in the varsity premises and advised them to discuss such sensitive issues among themselves and not make it a public affair.He also said that the Vice Chancellor of JNU should have handled the incident himself instead of allowing the police to intervene.

“Beginning (of JNU row) itself was wrong. If the VC had taken note of this and not called the police, then he could have handled the situation. Now, that the issue has caught fire, it is spreading across the country. I am unable to understand one thing, what was the need for them to bring Afzal Guru in this. Whoever did it was wrong. He brought disgrace to the institute,” Abdullah told reporters here. “If you want to discuss Afzal Guru, then discuss it quietly. Why make it public? If you think it was wrong then discuss among yourself. It is not right to discuss it openly,” he added.

The police had yesterday conducted a joint questioning of the three JNU students -Kanhaiya Kumar, Umar Khalid and Anirban Bhattacharya. Today, a fourth student, Ashutosh Kumar, was also questioned by the police. The students are facing sedition charges for allegedly raising ‘anti-national’ slogans at the JNU campus during an event to commemorate Afzal Guru’s third death anniversary on February 9.