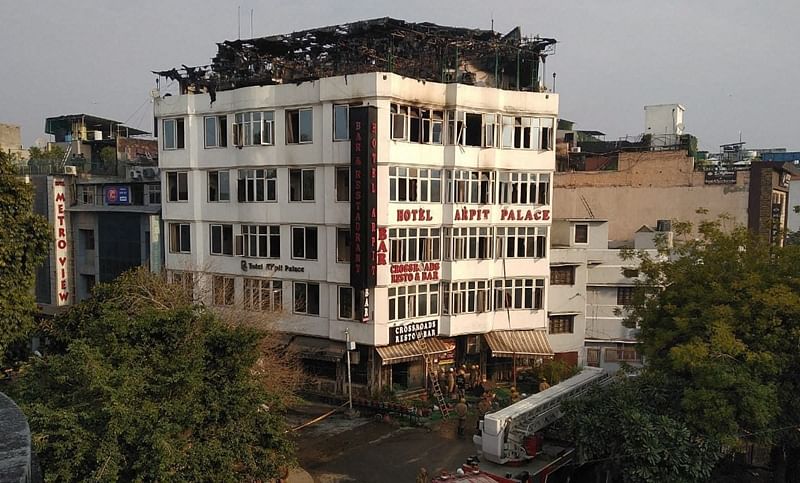 New Delhi: A massive fire swept through a four-floor hotel in central Delhi’s Karol Bagh in the early hours of Tuesday, killing at least 17 guests, including a child and two people who jumped off the building in a desperate bid to save themselves, officials said.

The blaze, in which 35 people were injured, started in the second floor of the Arpit Palace Hotel in the heart of the national capital around 3.30 am, trapping many guests who were deep in sleep. There were 53 people in the 45-room hotel, which had a canopy on the terrace housing what appeared to be a restaurant, officials said.

A call about the fire was received at 4.35 am and 24 fire tenders were rushed to the spot, a senior Delhi Fire Service official said.

At least 35 people were injured in the blaze, said Madhur Verma, Deputy Commissioner of Police (New Delhi), adding that one person was still missing.

“A 43-year-old woman suffered 45 per cent burn injuries,” he told reporters, adding that 13 of the bodies had been taken to Ram Manohar Lohia Hospital, two to Lady Hardinge Hospital and one to BLK hospital.

Of the 13 bodies, five had been identified — three from Kerala and two from Myanmar. A senior civic official said a suspected short circuit could have sparked the fire.

While the Delhi government ordered a magisterial probe, Home Minister Satyendar Jain said he has also directed the fire department to inspect buildings which are five floors or more and submit a report on their fire safety compliance within a week.

“Seventeen people have died, most of them of suffocation. Apparently, there were lapses (from the hotel administration’s side). Action will taken against those found guilty,” he said. Prime Minister Narendra Modi condoled the loss of lives.

“Deeply saddened by the loss of lives due to a fire at Karol Bagh in Delhi. I convey my condolences to the families of those who lost their lives,” he tweeted.

Deeply saddened by the loss of lives due to a fire at Karol Bagh in Delhi.

I convey my condolences to the families of those who lost their lives.

The hotel had a canopy on its terrace with chairs and tables laid out, indicating that there was an open restaurant operating there, fire officials said, adding that there was wooden panelling in the rooms inside that could have helped the fire spread. Delhi Chief Minister Arvind Kejriwal, who was among the many politicians and officials who visited the spot, announced Rs 5 lakh compensation for the next of kin of those killed.

The Delhi government also cancelled its fourth-anniversary celebrations in view of the tragedy. It was a nightmare without end, said Somshekhar, who had come to Delhi from Kerala with his family to attend a wedding Ghaziabad and was staying in the hotel.

They were residents of Ernakulam district in Kerala and were getting ready to go to Haridwar when the fire started.

“Ten of us were rescued by police and fire teams. We had booked four rooms in the hotel. We were all ready early morning to go to Haridwar when suddenly there was a power cut. They switched on the generator and there was heavy smoke and smell,” he said.

His sister, who is missing, alerted them to the smoke and rushed out to check what was happening, he said.

“The entire pathway was full of smoke. My mother and brother were along with my sister at the time. I immediately came to the room and opened the room for fresh air and we managed to escape. We were at the second floor of the hotel,” he said.

The fire broke out in the second floor of the building, a North Delhi Municipal Corporation official said. The hotel was first granted a licence in October 2005 and was renewed every year. The last renewal was done on May 25, 2018, and was valid till March 31.

“As per information gathered from the site, it reveals that the incidence of fire accrued at second floor at around 3.30 AM on February 12 due to short-circuit,” the official said A fire department official said some used fire extinguishers were found, suggesting people trapped inside tried to douse the flames in a bid to escape.

Former Delhi chief minister Sheila Dikshit expressed her grief over the incident. “I express my sorrow at the tragic death of several innocent people in a fire at #ArpitHotel in #KarolBagh. Our brave firefighters are working amidst extremely difficult circumstances to rescue those who are stranded in the building,” she tweeted.