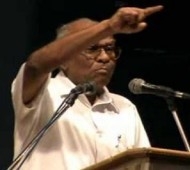 New Delhi : Communist Party of India (CPI) leaders on Saturday expressed grief and demanded a thorough probe into the death of their senior leader Govind Pansare, who succumbed to bullet injuries in Mumbai late last night. “It was very tragic news for the entire party. Comrade Govind Pansare was one of the senior most party leaders in the country. He was the secretary of the central control commission of the party which has been looking after the organisational disciplines, the behaviour and conduct of party members and party forums at all levels. It is so shocking he was attacked,” CPI leader D Raja told here.

“We have been demanding a thorough probe and the criminals must be booked and there must be proper action,” he added. CPI leader Atul Anjan also expressed his sadness over the tragic incident. “Comrade Govind Pansare is no more. People like me are very much sad. We pay respect to the leader. We pay respect to the leader, one of the giant leaders of the communist movement,” he said. Pansare and his wife were severely injured after unknown assailants fired on the couple while they were out for their morning walk at Sagarmala area of Kolhapur city. The attack had elicited strong condemnation from leaders across the political spectrum who demanded a special team to look into the matter.