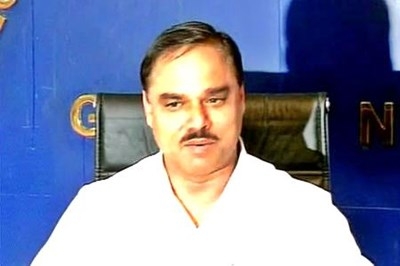 New Delhi : Stepping up its offensive, Congress today held a protest demanding immediate dismissal of Delhi Law Minister Jitender Singh Tomar in the wake of the row over his alleged fake degree which has snowballed into a major political controversy.

Police used water canon when scores of agitated Congress workers tried to break barricades to march towards the Delhi Secretariat, which houses the offices of the Chief Minister and his Cabinet colleagues. Delhi Congress chief Ajay Maken, who led the protest, said his party will not relent till Tomar was removed from the Delhi Cabinet. “We will continue our agitation till the Law Minister is

sacked. We also demand that Arvind Kejriwal step down as Chief Minister taking moral responsibility on the issue. The AAP had come to power promising to offer clean politics. But its leader is now protecting the corrupt,” Maken said addressing the gathering. The protesters shouted slogans against Tomar as well as Kejriwal and demanded immediate sacking of the Law Minister. The BJP had staged a similar protest outside Kejriwal’s official residence yesterday on the issue.

The Congress has been insisting on Tomar’s dismissal as Minister and has also asked for his resignation as member of the Delhi Legislative Assembly. BJP has also been seeking the Law Minister’s ouster. The AAP Minister has already rejected charge of any wrongdoing and refused to step down. On Wednesday, a Bihar-based university, from where Tomar claimed to have done his law education, had told Delhi High Court that his provisional certificate is “fabricated and does not exist in the institution’s record”.

The Tilak Manjhi Bhagalpur university had placed before the court its enquiry report stating that the serial number of the provisional certificate in the record showed the name of some other person and not that of Tomar. BJP and Congress have accused Kejriwal of adopting “double standards” on the issue of corruption and demanded that he dismiss Tomar from the government.