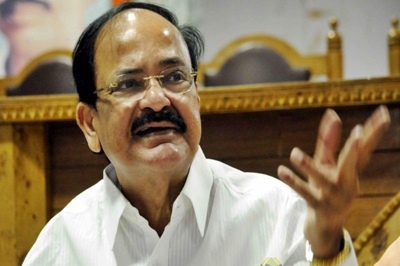 Hyderabad: The Communists took “control” of higher education institutes and central bodies when Congress became weak, and “polluted” them with their Left ideology, but the NDA government has now started a process to “cleanse” them, Union Minister Venkaiah Naidu said today.

Congress and the Communists had an understanding of convenience as per which the latter came to dominate higher education institutes and central bodies, he said. “It is the criticism of Communists (that persons with RSS leanings are appointed in educational institutions). Communists had control of these. They polluted the environment with Left ideology by taking advantage of Congress’ weaknesses. When it is being cleansed to some extent, they are indulging in a disinformation campaign. It needs to be understood,” he told reporters here.

Naidu was replying to a query over criticisms that the BJP-led government is appointing persons with RSS leanings to leading institutions. “In many educational institutions, central institutions and universities, when Congress became weak in 1969 and sought the cooperation of Communists, they came to some sort of understating, like a quid pro quo, that we will give you political support and you give us this opportunity (to control these bodies).

“They are feeling bad now that they are losing their monopoly. (Under BJP Govt) opportunities are being provided to all, and persons with merit are appointed and those with nationalistic outlook are given opportunities,” he said.

Replying to a question on the proposal to hike salaries of MPs, Naidu said he is not the decision-making authority and that a conference of party Whips (in Parliament) to be held in Visakhapatnam would discuss the matter.

“It’s a Whips conference wherein they are going to discuss this proposal. The proposal is to refer the issue to a commission. “We are a democracy, we have to discuss various suggestions and take up necessary action. Finally, it is the Government and Parliament which takes the final view,” said Naidu, who handles Parliamentary Affairs Ministry among other portfolios.